According to Bonaventure’s biography, St. Francis got permission from Pope Honorious III to set up a manger with hay and two live animals—an ox and an ass—in a cave in the Italian village of Grecio. He then invited the villagers to come gaze upon the scene while he preached about “the babe of Bethlehem.” (Francis was supposedly so overcome by emotion that he couldn’t say “Jesus.”) Bonaventure also claims that the hay used by Francis miraculously acquired the power to cure local cattle diseases and pestilences. 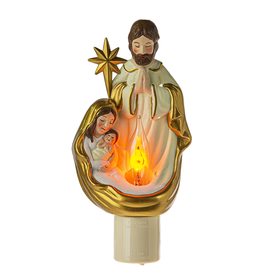 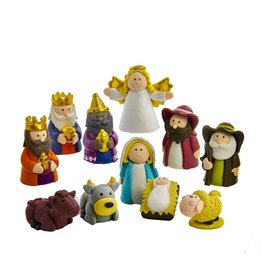 Kurt S Adler, $39, Child friendly, this fun nativity is made of claydough and has bright colors. An ideal inspirational Christmas gift for kids of all ages.
Add to cart
Claydough Nativity
$39.00 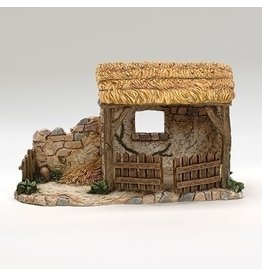 Since 1908, the House of Fontanini has created magnificent, old-world sculptures, including this gorgeous animal corral. This piece perfectly houses sheep, ox, donkies, and any other classic farm animal.
Animal Corral
$84.50 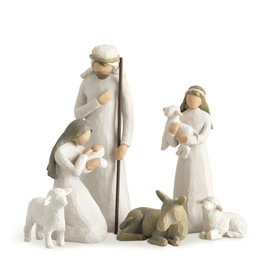 As a Christmas gift, wedding gift or self-purchase, the Willow Tree Nativity collection continues on as a family tradition.
Nativity (set of 6)
$99.50 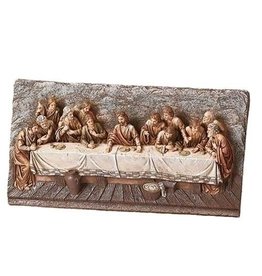 This gorgeous rendition of the last supper would make a wonderful addition to your Christmas or even everyday décor!
Add to cart
The Last Supper Wall Plaque
$274.00 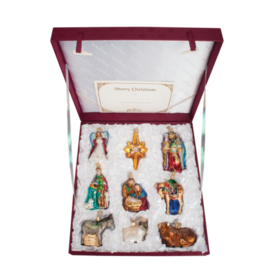 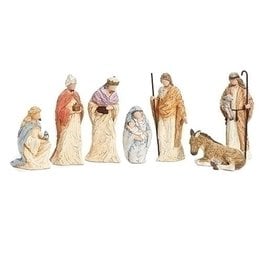 This seven-piece nativity set serves as a wonderful reminder of the true meaning of Christmas. This nativity set will make a stunning addition to any collection with the set uniquely reminiscent of a painting come to life.
Add to cart
Textured Nativity 7pc Set
$252.00 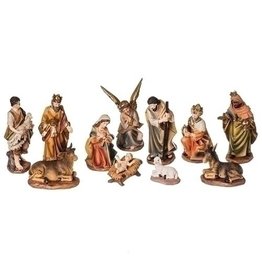 This eleven-piece nativity set serves as a wonderful reminder of the inspirational and joyous spirit of Christmas throughout the holiday season. The impeccable finish and intricately painted features of this set will make a stunning addition to any space.
11-PC Traditional Nativity Set
$134.00 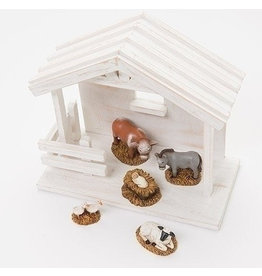 Capturing the true heart of Christmas, this beautifully crafted nativity set includes Baby Jesus with an array of animals. After all, Jesus is the reason for the season. Figures depict Baby Jesus in a cradle with an ox, donkey, lamb, and ducks.
5-Piece Baby Jesus with Animals Nativity Set
$24.99 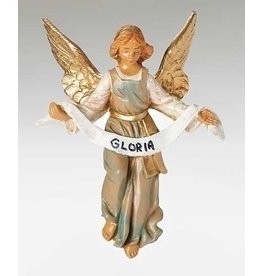 Made in Italy, these magnificent sculptures beautifully capture the joy and majesty of this sacred time of year. Made of a durable polymer, these pieces will withstand years of enjoyment and use.
Fontanini Gloria Angel Figure
$25.00 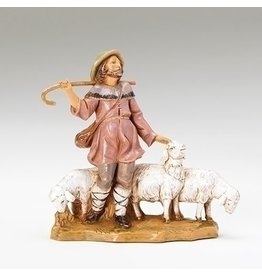 Made in Italy, these magnificent sculptures beautifully capture the joy and majesty of this sacred time of year. Made of a durable polymer, these pieces will withstand years of enjoyment and use.
Fontanini Elijah Shepherd Figure
$32.50 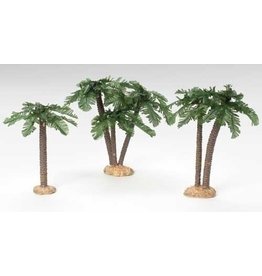 These realistic palm tree figures look great with any Fontanini village piece. Made in Italy, these magnificent sculptures beautifully capture the joy and majesty of this sacred time of year.
Palm Tree Set
$59.50 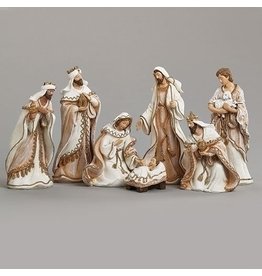 The woven gold trim gives the figures a fabric look, making them more realistic and detailed than other sets. Place this set front and center or incorporate it into your other holiday decor to give it an elevated look.
Gold Woven Nativity Set
$132.00 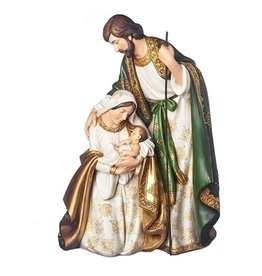 This beautifully hand-painted Holy Family Figure is made of the highest quality cast resin stoneware. This piece is painted with gold and olive green accents.
Gold & Green Holy Family
$137.00 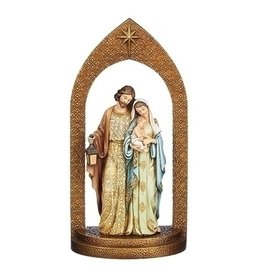 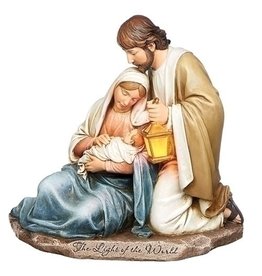 This beautiful nativity figure shows Mary, Joseph, and baby Jesus huddled together under the light of their golden lantern. They sit on a stone, with the words "The Light of the World" carved into the base.
Lit Light of the World Holy Family
$53.00 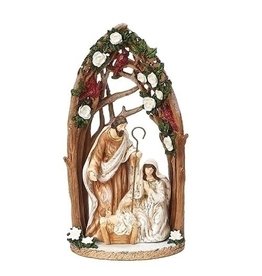 Celebrate your faith this Christmas holiday season with this inspirational figure of Mary, Joseph, and baby Jesus in front of an ornate and floral arch in beautiful jewel-tone colors.
Holy Family Under Floral Arch
$46.00 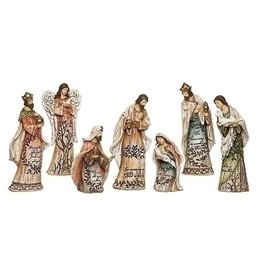 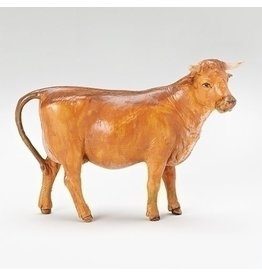 Every nativity set needs an ox present at the birth of baby Jesus. This humble ox has a deeply expressive face. The warm tones and creamy under belly coordinate with any Nativity scene figures you already possess.
Standing Ox
$23.50 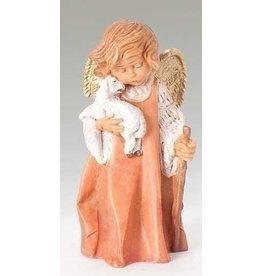 This is another delightful shepherdess Fontanini figure to add to your Nativity set. This angel is tenderly and protectively holding a small sheep in her arms, giving the impression that she is a careful and caring shepherdess.
Little Shepherd Angel
$20.50 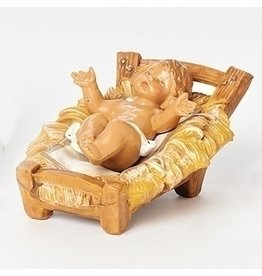 Collect this traditional Fontanini Baby Jesus for your Nativity set and obtain an heirloom piece designed to last.
Add to cart
Baby Jesus
$25.00 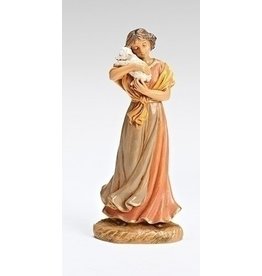 The Maia figure is quite lovely and the whole figure gives you the feeling of tenderness, as you see how carefully Maia is securely and protectively holding the little lamb and how content the lamb seems to be.
Maia
$26.50 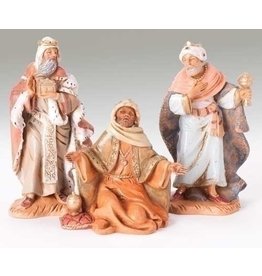 As told in the story card which is included with your Fontanini piece, the three kings made a long journey to greet and honor Jesus by following the Star.
Three Kings
$76.00 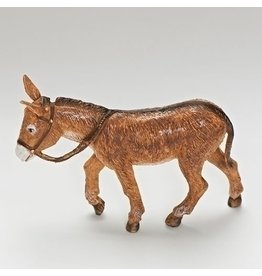 Many of the Fontanini figures have very unique features, and this donkey is one of those figures. As a precursor to what is going to happen in the life of Jesus, the donkey comes with a cross shape on its back.
The Donkey's Cross
$26.50
Page 1 of 2